Two weeks ago I ran a survey about RMM (Remote Monitoring and Management) tools. The first results were posted on my blog here.

This post will dig into the "open ended" comments in the survey results. I had four open ended questions:

Let's start with love and hate.

117 respondents (75%) had a comment about something they loved. One of those was simply the comment, "Love? That is strong." Yes, it is. Since I asked about whether people would choose their current tool again, I thought it was important to try to tease out whether that's because changing would be a hassle or whether users really love the tool they have.

The following percentages are all based on the 117 responses to this question. 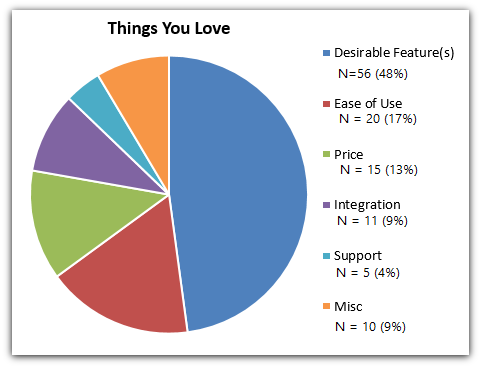 First of all, let's acknowledge the comment that Love is a strong word. But more than that, my actual question was whether there was something you Super-Duper Love about your Remote Monitoring tool. It says a lot that 75% of those who filled out the survey have at least one feature they truly love about their RM tool. Obviously that's good news for vendors.

It's not surprising that 48% of the "love" responses were about features - either one specific feature or the overall feature set of their RM. Among specific features mentioned more than once:

8 (14%) mentioned the power of scripting

The remainder is a list of 21 items mentioned once each.

The fact that Remote Control tools are mentioned so prominently should send a signal to vendors: Take this seriously. The 19 mentions is even significant if you extent the universe to all respondents. It means that 12% of all people who took the survey love the remote feature enough to single it out.

Compare that to backup, mentioned only once, and two variations of comments on anti-virus, also only mentioned once each.

After specific features, it's quite a jump down to the categories of

113 respondents (72%) had a comment about something they hated. No one seemed surprised by this question. At least love and hate are pretty well balanced. I was surprised, however, by the one thing that was most mentioned as a "hate" item for RMM systems: Patch Management!

The following percentages are all based on the 113 responses to this question. 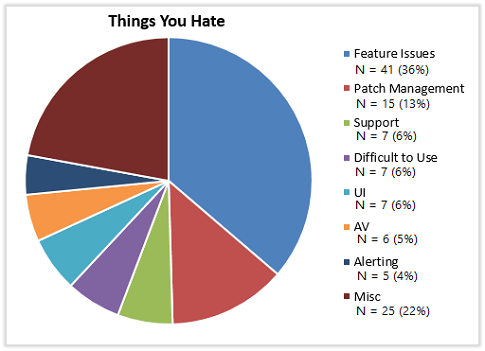 The "hate" category is far more spread out than the Love category. 41 respondents (36%) mentioned some specific feature. But there was no one feature that stood out on the hate category the way remote control dominated the love category. But the item that really stands out is Patch Management. 15 respondents (13%) cited patch management as the notable item they had the most trouble with.

That's definitely not good in a remote monitoring and patch management tool! Of course we didn't get all the details, so there could be a variety of reasons for this. Are patches not being applied? Are reports absent or incorrect? Is the process just too difficult? Is it working fine and the user has no way of knowing that for certain?

So while this issue stands out, it doesn't appear to have a major impact on overall satisfaction.

We step down quite a bit to the next category of things readers hated. Support/account management got seven responses, as did difficult to use and User Interface. Everything else drops off from there.

The good news for vendors of RM solutions is that problems are shallow and wide. Most "hated" items were literally mentioned only once or twice and could not be aggregated with others. While you don't want to ignore these concerns, at least you know there's not some glaring problem in one area.


Why Haven't You Implemented?


In all, 63 people (40% of all respondents) answered Question #4: If you have not implemented your RM Tool at least 75%, why not? And by far the answer was a very predictable lack of time or resources (but mostly time).

The following percentages are all based on the 63 responses to this question.

22 respondents (35% of those who answered this question) said that time or another resource limitation was the problem. And 17 of those 22 specifically used the word time.

9 respondents (14% of those who answered this question) said that they were using another product for some of the features. For example, several people don't like the anti-virus program bundled with the RM solution, so they buy AV elsewhere.

As I mentioned in Part 1 of the results, difficulty in using the product was not a major barrier. Only eight people (13%) said they did not implement the software because it was too difficult.

Other common responses (5, 6, or 7 respondents each) included:


There were a few additional reasons with one or two respondents each.

Two categories stand out here as needing attention: Time and the MSP Model. Both of them have the same answer: You need to get help! If you haven't had time or don't managed time well, you need to join a peer group, find a coach, hire an assistant, or do something to get un-stuck.

Even if you consider the tool simple to set up, it's still a lot of work. But the sooner you start using most of the features, the sooner you'll start improving your service and profits!

Figuring out the MSP model is really a matter of clearing your mind long enough to think about your options and picking one. So we're back to peer groups, etc. You have to take time to work ON your business. But you already know that, right? There are many great resources today. Get help!

I asked folks to comment on any additional information that I should have addressed in the survey. Here are a few suggestions.

The most common suggestions were:

- How open is the vendor to your feedback and suggestions?

- Number of RMM used (deployed) before using the current RMM

- Integration with other software besides PSA

The one that really struck me was the question of using multiple RMM tools at the same time, and related topic of changing tools. I should know better - I've used multiple tools and I've changed tools a few times.

We started out with Kaseya back in the day when they had no real competition. After a few years, we ran Kaseya and Zenith (Continuum) side by side on servers for a year. Then we moved to strictly Continuum. Eventually, I started working with MAXfocus/LogicNow and we started deploying them and replacing Continuum.

When Mike took over the company, he moved all clients to LogicNow (now SolarWinds MSP). A few years later he sold that company and I started another MSP business. I implemented the LogicNow product exclusively.

So while there are plenty of solutions I haven't tried, I certainly have experience running tools simultaneously and switching tools. So I should have thought about that when I put the survey together. I'll be better next time. :-)

I hope you found this useful. If you think we should do one on PSAs, let me know. I'd love to get over 500 responses just so I feel more confident in the representativeness of the numbers.

Thank you for your participation.

This survey was conducted May 23rd to May 31st via the Small Biz Thoughts blog. There were 158 respondents total.

All the errors are mine!