In an inspiring and heartbreaking 13.5 hours, ConnectWise President Arnie Bellini almost crossed the English Channel. He released a video saying this was an example of failing fast - his decision to stop when he realized he had been pulled past the landing spot by the tides.

I don't mean to argue with someone who got more exercise yesterday than I have in my entire life, but this isn't failing at all. It takes far more than I can imagine to attempt to swim the English Channel. 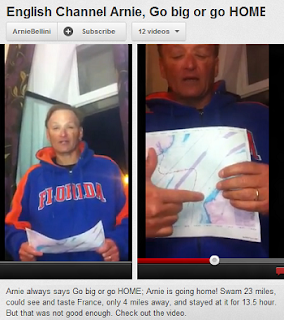 First, this is a great example of a BHAG - Big Hairy Audacious Goal. The rest of us have lots of excuses of why we've never tried to do something like this. But at the most basic level, we simply never set that as a goal. It is appropriate that this comes so close to the Olympic games in England. There, too, the athletes each set themselves the goal of getting to the Olympics.

Second, there is massive training. You never wake up one day and swim the English Channel. I don't care who you are, you have to train for this. You have to know what it feels like to get in that water. You have to experience the waves. You have to be in great shape. You have to be able to swim for more than ten hours! All of that takes practice.

Third, it takes planning and logistics. Boats, gear, timing, etc. Again, I can't even imagine how you plan something like this. I'm sure that icy water would be a lot icier in January, so the right month matters. But I don't even know if you need permits or a special Visa to arrive in France by swimming! You have to have some kind of a team and some emergency planning. Details, details, details.


Fourth, it takes personal conviction and follow-through. After the goal-setting, after the planning, you have to execute that training. You have to push through the barriers. You have to do all the little things and big things that move you to your goal.


I can say that I am honestly in awe of Arnie Bellini for this feat. It would have been even more awesome if he had made that last four miles. But he has attempted to swim the English Channel 100% more than I ever will in my lifetime. He has set a Big Hairy Audacious Goal for himself and worked hard to make it happen.

At every step - the goal setting, the planning, the training, and the execution - he exceeded the achievements of most of the people you'll ever meet in your life.

While I'm sure it is a terrible dissappointment to be stopped so close to the end, I hope Arnie accepts this as one of the great victories of his life. He is an inspiration!

(Oh, and on a personal fitness note: I did yoga yesterday.)