Robin's Bootcamp - Nothing But The Best

Last week I posted about heading to Robin Robins' big bootcamp (actually Robin's Big Seminar). Due to a traffic snafu that made us late to the airport, we switched planes, stood by for a few hours, and missed the first half of the first day's meetings.

I'll say one thing about Robin's Bootcamp: It's all business. Yes, there are cocktail receptions two evenings. One (Datto's) was open to the entire conference. The other (eFolder's) was just for Producers Club members. But even after both of those, various groups had late-night meetings. One night my daughter, Tori, and I were heading down to Broadway street to listen to music. Two different people couldn't go with us because they had meetings that started at 8 and 9 PM.

Unlike many conferences, where work starts late and finishes early, Robin's attendees can expect to be scheduled all day - meaning 7:30 AM to about 10 PM.time.

The show was filled with good attitude, hard work, and an eagerness to learn. In addition to content from the stage (and a big binder full of materials), the networking and hallway conversations were great. 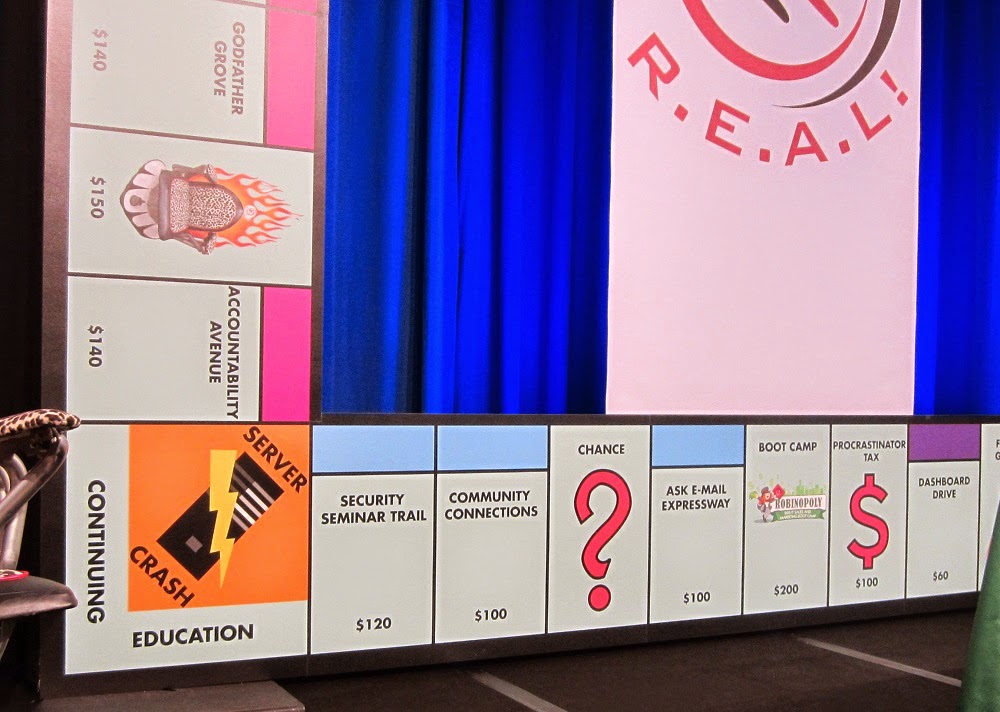 You might imagine that the attendees are made up of only large consulting companies with large budgets. Not so. There were plenty of 1-2-3 person companies represented. The deciding factor for these folks was not company size so much as a willingness to invest in their business.

The basic story for most long-time attendees is very similar. First, they were trying to figure out how to get marketing done so they could grow their business. Second, they bought into one or more of Robin's programs. Third, they discovered that they have to do lots of things differently, so they started making changes. Fourth, their business began growing and growing and growing.

What a bootcamp like this does is to stir up the DNA of ideas, motivate people to set larger goals, and get them pointed in the right direction.

The two primary speakers were Kevin O'Leary from Shark Tank and Dan Kennedy, a long-time marketing guru. Both were good entertainment and very educational. Personally, I've been exposed to Kennedy's messages for decades, so I didn't find a lot of inspiration there. But I wrote down some notes and added them to my to-do list. So I have to admit it was good for me to hear him speak.

O'Leary was funny and did a good job playing up the fact that he's the kind of guy you can learn from, but you probably don't want to actually work with. Overall, more people talked about his presentation for the next three days than anything else. Some people loved every bit of it. Some thought he was an a-hole.

If the maxim holds true that it's better for people to talk about you than to agree with you, then O'Leary did a perfect job. He made a few points that are kinda sorta mostly true, but hard to accept in small business. One point he made in particular is that employees are not friends. That advice might work great in a corporate world where you draw a fat, dark line between your work and your personal life. But in small business, many people disagree with it.

O'Leary makes it very clear that he is a capitalist first. He doesn't care about the people he works with, the companies he buys, or personal lives of those he interacts with. Most people in the room started their own businesses to get away from him. So while callous comments about firing people can be presented in an entertaining manner, that piece of advice was quietly shelved by almost everyone.

Overall, his advice was great. And it was certainly entertaining.

As you might expect, the big draw was Robin herself. If you haven't met her, I encourage you to check out her YouTube channel. What you'll find is a person who is really smart, down-to-earth, and very good with marketing. You can tell right away that she enjoys what she does and she's built a great team around her to get it done.

After the first day, Tori looked at me and said, "Her people really love her." It's true. Robin runs the show with a no-bullshit attitude. Everyone shows up to work, but the work is fun. The five-pound binder you haul around for four days is a clear reminder that there's lots of work to be done.

Sometimes I get jaded because I've been to so many shows. But I assure you, this one stands out.


I recorded a number of interviews, and I'll be posting those up at www.SMBCommunityPodcast.com - so subscribe there an learn a little more about the Robin Robins Bootcamp and the vendors who made it possible.

Thanks for having me, Robin!

Great DNS Training - a Primer for IT Consultants

This course is a primer for IT consultants.  It’s not everything there is to know – Just the information you need to know to support small b...