I've been using Windows 8 for many months now. I recently installed the RTM (release to market) version. That's the final code being pressed onto DVDs and installed on computers for sale after October 26th.

In the Spring SMB Nation event (MVP Nation) I saw previews of Windows 8 on various platforms, including desktop/laptop, tablet, and phone. The most exciting of these is the phone. In fact, I liked it so much that I will actually move to the Windows 8 phone when it's available. After being committed to BlackBerry for many years, I have been using a Droid for some time and find it very disappointing. So I'm ready for a change and Windows 8 Phone looks like the winner.

Windows desktop is another story. I think we'll recommend the following:

- If you're buying a new computer, and it comes with Windows 8, that's fine. You might not like it.

- If you have any business critical software that's not made by Microsoft, it may not work in Windows 8. So hold off until every one of those programs has been tested with Windows 8.

- If you are a power user of any kind, you will be very frustrated with Windows 8. There are many functions that you can't get to with keyboard commands - or they are so cumbersome that you give up. So you'll be spending 40% of your time moving your hand between the keyboard and mouse.


The Flash Show-Stopper in Windows 8

Many programs fail to install in the release version of Windows 8 for one simple reason: Flash. Here's what's going on.

First, Internet Explorer 10 is built into Windows 8 and can't be removed. It is part of the operating system.

Second, IE 10 (and therefore Windows 8) does not allow plug-ins. At all.

Third, as a result, Adobe Flash has been integrated into the operating system (internet explorer) because it can't be a plug-in.


Those three truths result in the show-stopper. Many programs check to see which version of Flash you have. If you don't have it at all, they install it for you. Well, in Windows 8, these programs never find Flash because they're looking for a plug-in that can't exist. When they go to install Flash (either from their own installation CD or the Adobe site), it fails. Because it's not allowed.

Warning for technicians: Don't waste time trying to get around this. When you try to install flash from a CD it fails. When you go to the Adobe site, you get a notice that says "This content requires a newer version of the Flash Player. Please download and install the latest version of Flash Player from the Windows Update site before continuing."

All Flash updates on Windows 8 have to come through Microsoft, not Adobe. Period. Note also that Flash is currently available only from Windows Update and not as a download from Microsoft. You can't take it out and you can't install an older version because older versions are plug-ins.

This is a show-stopper because you can't trick programs into seeing and using a plug-in that doesn't exist. Maybe Microsoft and Adobe could create a program to do that, but why would they? So programs fail to install, and the only fix is to wait for a version that understands the new Flash configuration in Windows 8.

I don't see Intuit, Adobe, or other software manufacturers making patches or work-arounds for this. They'll adapt to it in the latest release of their software - so your client has to buy new software.

As a result of all this, Windows 8 should not be deployed until you have compatible versions of all critical software in hand. One of the things that killed early adoption of Vista was that both hardware and software manufacturers didn't commit to it until more than a year after it was released. So lots of things didn't work. Windows 8 may experience something similar. 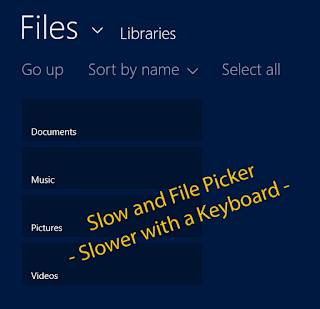 Windows 8 has no shortage of annoyances. It is really designed around tablets to compete with iPad. That's great if you have a tablet. But most desktop/laptop users need a good old desktop operating system.

Windows 8 has abandoned the desktop user. It's like using a mouse to control your phone. Pain in the ass.

If you have extra money laying around, consider buying stock in Stardock and other makers of Windows shell modifications. They'll be busy creating a usable desktop you can lay over the Windows 8 operating system. Stardock already has a widget that puts the Start button back where it belongs.

(I'm not sure why Microsoft is so adamant about eliminating the Start button/orb. In the developer preview of W8, you could use a registry hack to enable it. But in the Customer Preview, RC, and release editions, that's gone. Why is this a "force of will" stand by Microsoft instead simply giving people options?)

It's not particularly hard to navigate in Windows 8, but power users will find it less productive even after months of using it.

Another key annoyance that I assumed would be fixed in the release version is the choice of default programs. Program registration is different in W8, so your favorite program may not be on the list of programs to select as a default program. And even if it is, that selection may not stick. So your most-used tools might not be associated with the files you always open. VERY annoying.

I am now assuming this fix will come out shortly because it affects many programs.

The Metro (or whatever it's called now) file picker is also extremely annoying. I don't care who you are or how much you love the mouse, that's an incredibly slow way to find files.

. . . And there are lots of other annoyances. Pick your favorite!


The Enterprise Desktop Will Not Adopt Windows 8

One key market for any operating system is the Enterprise - really big corporations. These guys are always a little slow to adopt because they have lengthy vetting processes to make sure the new O.S. will work in their environment and with all of the other "approved" software.

Just four days ago Gartner released a research note predicting that enterprise customers will avoid Windows 8 for quite some time. The primary reason: The touch-centric nature of the operating system. Tens of thousands of users working with touch screens instead of keyboards simply won't happen. That leaves them using a keyboard with an operating system that is un-friendly to keyboard users.

Most are expected to finish their move to Windows 7 in the next few months. They are - according to this research - not adding Windows 8 to the mix. See the original report and this follow-up article from ComputerWorld.

I'm not sure why Microsoft is so adamant about reducing the choices we have to access our computer systems. But they have clearly committed to this path.

Here's the good news for you: FUD.

Fear, Uncertainty, and Doubt are always an opportunity to make money consulting. That means labor. Training. Educating. Demos. Public discussions that place you in front of a room full of confused business owners.

Even if you recommend staying with Windows 7 for now, you're the expert!