Jerry Koutavas over at The ASCII Group sent me this press release about the big ASCII Cup race for 2012. The winner was crowned on the rooftop of the Rio in Vegas - 50 stories up with an amazing view of the city. Here's my picture drinking from the ASCII Cup, served by winner Rob Rae from Level Platforms.

Bethesda, Maryland --- October 13, 2012 --- The ASCII Group, Inc. is pleased to announce The ASCII Cup Winner, Top Contenders and Esteemed Noble Partners awards are bestowed annually to  technology companies that have shown outstanding channel goodwill and a commitment to helping ASCII members grow their revenue and more effectively serve their customers.  The winners are voted upon by the ASCII attendees at regional ASCII Success Summit meetings, and the Cup and awards are awarded each year at the SMB Nation event. 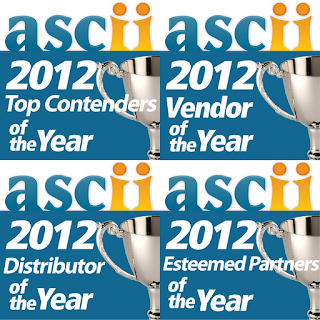 The ASCII Cup - the legend continues...

Each year the ASCII Cup is bestowed to a single technology company, voted upon by ASCII Group members at regional ASCII Success Summit meetings around the country.

The ASCII Cup recognizes companies that have shown channel goodwill, outstanding technology, and partner programs that provide an outstanding opportunity to build business.

This year’s 2012 winner The ASCII Cup, Top Contenders and Esteemed Noble Partners were announced on the rooftop of the RIO in Las Vegas at a private industry gathering.

The ASCII Group is proud to honor this year’s recipient of the ASCII Cup, who clearly exemplifies the principles on which the ASCII Cup was established.

The 2012 ASCII Cup for Vendor of the Year is Level Platforms! 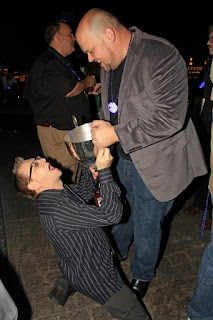 Knighted as the Top Four Contenders for The ASCII Cup are Datto, CharTec, Hewlett Packard and Intronis.

Knighted as The Distributor of the Year was D&H for getting the most votes throughout the year in the category of ‘Best Distribution Sales Support.’

“On behalf of the ASCII Group community, congratulations to Level Platforms as this year’s ASCII Cup recipient, to each of The Top Contenders and Esteemed Noble Partners for building well received channel friendly solutions that resonate with our community.” Jerry Koutavas, President, The ASCII Group.

Pictures and video of the celebration will be posted on Facebook under the ASCII Cup fan page and The ASCII Cup website.

About The ASCII Group

How many different hats do you wear today to run your business?  Since 1984, The ASCII Group has helped solution providers focus more of their time on building their business, not administrating it. The ASCII Group creates programs and services to improve business performance in sales and marketing, vendor management and overall operations. In addition, the member community shares information on satisfaction of products, business strategy and opportunities unique to the industry and the ASCII community. Come see why at www.ascii.com.