Can You Feel the Cloud Breathing Down Your Neck?

Let's do the math. In fact, let's do multiplication.

If you haven't read The Big Switch: Rewiring the World, From Edison to Google by Nicholas Carr, go get that right now.

Verizon Wireless has a super-cool offer. It's an HP netbook with 3G internet access built in. You open it and cruise. A one step process.

$199.99 With a two-year agreement on a Mobile Broadband plan"

$199.99. How long before these start showing up at client offices?

It should be about 20 seconds before all the wireless providers offer this. Or, eventually, you'll just pop a SIM card in your netbook. Anyway, very cool.

Let's say your company's major applications are all available in a hosted environment. CRM (Salesforce.com?), Finances (Quickbooks Online)?, or a hosted line of business application.

Now you can pop open your netbook and work anywhere, anytime.

Let's just say that Microsoft is patenting a computing device that scales up and down as needed to balance computer power needs and price. Let's just say the configuration looks a bit like this: 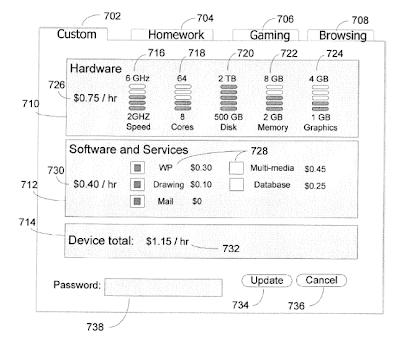 "A computer with scalable performance level components and selectable software and service options has a user interface that allows individual performance levels to be selected. The scalable performance level components may include a processor, memory, graphics controller, etc. Software and services may include word processing, email, browsing, database access, etc. To support a pay-per-use business model, each selectable item may have a cost associated with it, allowing a user to pay for the services actually selected and that presumably correspond to the task or tasks being performed. An administrator may use a similar user interface to set performance levels for each computer in a network, allowing performance and cost to be set according to a user's requirements."

Note: We're talking about the U.S. Government here, so you can't actually download these images without a plug-in. The pdf's are much clearer than the tiff files, which makes no sense. Anyway, get the cripple ware tiff viewer here.

Microsoft is playing catch-up, but the services are different and these companies (plus others) will be leap-frogging each other for years. Right now, all the processing power you want is $0.12 USD per hour and storage is $0.15 USD per GB per month.

The concept of plugging a thin/light device into the internet and simply having all the computing power you want is here.

So let's connect the dots.

If Microsoft is working on this, you know others are as well. Certainly Zenith, Citrix, Intel, Sun, and probably HP and Dell for starters.

There are clouds out on the Internet just waiting to be used.

Start brainstorming now. How will you make money off this?

One innovation we can't ignore: You need to be pushing this to your clients today. Today. Verizon wireless is doing it. AT&T will be next. Then Comcast, Viacomm, and BT. The providers of "the pipe" are going to try to own this business. And for some time they probably will.

Will you be the first person to tell your clients about this, or the second? Third?

One thing's for sure: If you put your head in the sand, you're going to miss one of the great growth opportunities of your lifetime. And five years from now, if you ignore this, you will be irrelevant.