Lessons from the Electrician

I had a very interesting experience yesterday that demonstrated many lessons for those of us in any service business - including managed I.T. services.

We recently moved into an older house and I wanted to do some upgrades to the electrical wiring. Most of the outlets in the house have two wires and no ground. My assumption is that those with three pronged outlets were simply not grounded. I wanted to add some guaranteed grounded outlets to the main office area and my study - plus add a drop for a hot tub later down the road.

I knew the project would be expensive but I don't know enough to know how expensive.

Enter Electrician One. I explained what I wanted to do. He looked at the electrical box and told me that it was "old and full" but he could make it work. He started talking about a $1,200 price tag. But as we talked more, he talked himself down to a $900 price. And eventually he said he could do it all for $800.

I had already checked out his contractor's license online so I knew he was licensed and bonded. In absence of any other information, I took his quote at face value.

Enter Electrician Two. Well, Electricians Two. Two guys showed up. They put on booty covers to cover their feet as they entered the house. I told them what I wanted. They immediately demonstrated that they were miles ahead of the competition.

First, they took off some receptacle cover plates and looked inside to check out my assumptions about the grounding. They used a ground fault tester to verify that the outlets were not ground properly. I had done this with a basic tester that simply said "ground fault." But they found some grounding, which means that incomplete grounding is taking place due to the wiring practices of the 1960's. The outlets had three-wire romex, could be grounded easily, but were not grounded.

Second, they looked at the electrical box and said that it needed to be replaced. They recommended a 125 amp box, which could be got at a reasonable price. BUT it meant that they had to patch the wall where the old one comes out. AND they would need to upgrade the connection to the electrical utility.

Third, we had a lengthy discussion about the wiring options for the hot tub. They recommended setting it up so that any hot tub we bought could be connected legally and safely.

Fourth, they said that we didn't have to add all the circuits I originally asked for. They recommended setting up three sets of outlets (as I wanted) but putting them all on one 20-amp circuit.

Fifth, they want to set up a ground system that brings the water heater and HVAC into alignment with modern code and safety standards.

Total estimate: $8,300. Yes. Ten times more than the Electrician One. 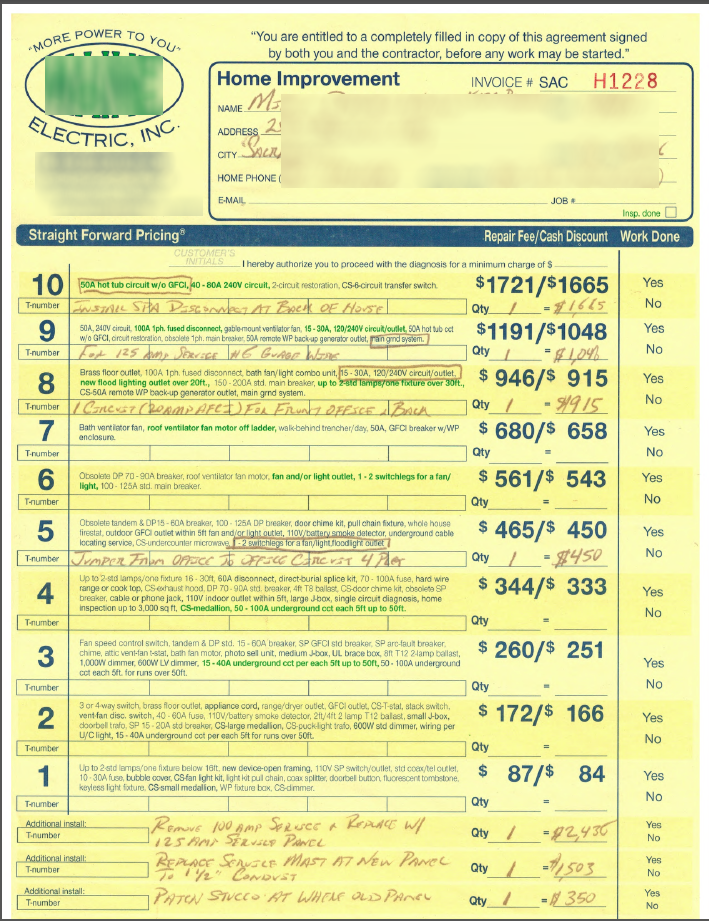 Which quote am I most likely to go with? Sadly for me, it's the more expensive one. (In reality, we're discussing a 10% discount from that. But $7,500 is still a lot of money.)

Electrician One is very much like the consultant who starts with some false assumptions.

False Assumption One: It's all about the money. I don't want the house to burn down. I don't want a half-baked job. I don't know all the troubles that could come my way. And if the second quote was a few hundred dollars different, I might go with the $800 quote. But the difference so dramatic that I have to take the higher quote seriously.

False Assumption Two: The buyer wants to make the old equipment last longer. If the old box had five open slots and was in great shape, things might be different. But it was already full and I don't know what he had in mind to make it expand to fit my needs.

False Assumption Three: The buyer knows what's going on and what needs to be done. I know enough to know what I think I want. But on one hand I was asking for more than I needed. And on the other hand, I had no idea what I already had. The grounding issue turned out to be minor. But Electrician One didn't do the simplest test to verify that I know what I think I know.

Electrician One made this all about money. And left potentially $7,500 on the table.

Electricians Two were far more professional in every way. They worked from assumptions of success.

Successful Assumption One: We're going to do the job right. There is a right way to do this. It's in the client's best interest to do it the right way. Avoid the discussion of "can we do it cheaper?" until the client brings it up.

Successful Assumption Two: Know what you know. Unless your client is in your business, verify that what they tell you is accurate. It's not that the client's lying, but they simply don't know. (And even if they're in your business, it's still good to verify.)

Successful Assumption Three: Deliver your pricing very matter-of-factly and without apologies. This company actually had a very good technique: They pre-printed several common tasks and listed a high/low range for each. Then they quoted the low end of that range.

Electricians Two also added an overall air of professionalism in how they presented themselves and their work. There was no talk about cutting corners. They didn't say so, but I found myself comparing their professionalism to their competition.

Well now I'm better educated but still confused. Now I have to get a third quote and hope it's close to the higher quote but gives me some leverage to negotiate the price.

But think about the successful approach of Electricians Two. They are the front runners for this job even though they are ten times as expensive. And even if they get rejected in favor of the other guys, it's okay. They can get rejected for nine jobs at $800 each and still come out ahead with one job at $8,300.

I hope my neighbors use the expensive electricians and not the cheap ones. I don't want fire from their house to jump over to mine!