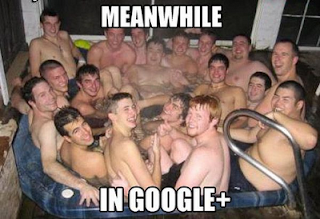 Last night my daughter asked me, "So what comes after Facebook?"

All I could think of was, "Well, it's not Google+"


I'm not a "gamer." I have enjoyed video games over the years, but I've never really been addicted to any. I've never built a monster computer in order to play a video game.

The game I've tried that I liked the *least* was Myst. I received it as a Christmas gift one year. It has no instructions and no apparent point. You're on an island. You can walk around. You can poke things and look at stuff.

When I first got the game, I installed it and spent about half an hour being totally frustrated. No instructions. No point. No goal. Just walk around the island. I couldn't figure out how to do anything. And there was my cute daughter to play with, so I shut it down.

On probably a dozen other occasions, I loaded the game, wandered aimlessly around the island, realized I couldn't figure it out, and then shut it down. Then I uninstalled it and never considered trying again.

Someone finds Myst entertaining. It's a very popular game. And there are sequel games. But I found it confusing and not entertaining.

So I look to see what else there is to do. Then I close it down and do something else.

I see that Google+ is different from Facebook, but I don't see a compelling reason to use it instead of Facebook. It reminds me a bit of the Microsoft small business financials product. Everyone who got it installed it, looked around, realized it was like QuickBooks with fewer features, then uninstalled it.

It might be a great product, but there's no compelling reason to switch.

Strangely enough, I believe Facebook's popularity is about to reach its zenith. I don't know what will replace it, but it won't be Google+ (in my opinion). Just as Facebook came out of nowhere to replace Friendster, Yahoo Groups, and MySpace, something else is hiding in the wings waiting to take down Facebook.

(Note, please that Friendster, Yahoo Groups, and MySpace still exist. But their market share has been destroyed by the popularity of Facebook.)

Sometimes we convince ourselves that something is so big that it can never go away. Like the Magellan search engine. Or Overture, Alta Vista, Lycos, Infoseek, Excite, and a dozen others. Oh, and Yahoo. Dominance is a fleeting thing on the Internet.

Probably the biggest thing Facebook has going for it is that the universe is not expanding as fast as it used to. Despite the addition of billions of people in China and India, new Internet connectivity won't guarantee an expanding user base as it did ten or five years ago. That means that market share will come by stealing actual users and not merely by acquiring new users.

It's a new game and Facebook is perfectly situated to play the old game.

I'm sorry for Google+. I mostly like what they do as a company. I give them more money than I give to Facebook. But right now Facebook is winning the social media game. If you're only going to participate in 3-5 social media sites, one will be Facebook.