If you get my newsletter (See link at the top) or follow me on Facebook (/karlpalachuk), then you know I'm rambling around Colombia, South America. I thought future travelers might be interested in some notes about the technology experience we're having here.

There are four technologies the modern traveler will want to have: GPS, telephone/smart phone, power, and Internet access. Happily, all of these have been good except the one that matters the least: GPS.

Here's a map of our travel so far. We landed in Bogota where, as you can imagine, everything worked great. We stayed at a Marriott Courtyard with modern everything. We took Uber and Tappsi for taxi service. It was easy to get around and no more of a hassle than any modern city. 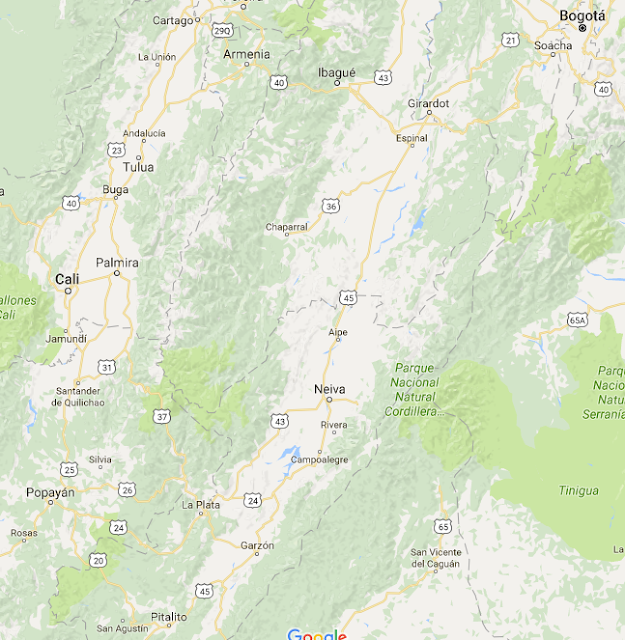 We drove down highway 21 to 45 all the way down to Pitalito. We stayed the first night in Neiva, then Pitalito and San Agustin.

The worst road so far (and literally perhaps the worst road in Colombia) was to take "highway" 20 over the top of the Andes to Popayan. This was unpaved for about 80 of 83 miles and took 4.5 hours. Obviously there's cell signal and no hope of getting help if something goes wrong.


We rented a car from Localiza and got their GPS. It is a crappy, low-end, much-abused Garmin whose maps have not been updated in years. Lots of roads are missing and it has no idea that many city streets have become one-way.

At first we couldn't figure out why we were zig-zagging all over Bogota to get out of town. Then we went through the "avoidances" on the GPS and found that it was set to avoid highways!!! So that wasted an hour. We switched to my phone GPS tracking and that worked great.

Now the truth about GPS so far is that it's kind of handy as a confidence builder, but the roads are extremely well marked and it's not really necessary. The major paved roads have a few round-abouts that are scary because of the amazing number of swarming motorcyclists who obey no traffic rules whatsoever. But they're well marked and you'll do fine with an attentive co-pilot.

GPS is handier for finding interesting sites and restaurants. Here my cell phone out-performed the Garmin every time . . . until I got out of data service range. Then I just got a map but no directions on where to go.

Recommendation: Bring your GPS from home and update the maps before you get to Colombia. Both Josh and I have GPS devices, but we got one free with the car. Still, we should have brought a newer device that's up to date.

Smart phones work very well in more populated areas. I have T-Mobile and bought an extra data plan to make sure I had a handle on expenses. As with most companies, if you plan to use extra data it's much cheaper than if you end up using extra data.

With T-Mobile all functions on my phone worked within ten minutes of turning it on in the country. This included texting, email, GPS, downloading apps, etc. I can even make phone calls if I need to. We had to figure out the dialing. For me, I have to dial 011 57 (my country code plus Colombia's) plus area code and number. Josh has Verizon and had to figure out how to actually dial a + sign because he has to dial +01 57.

With Verizon, the phone is constantly switching to various network settings, so you have to set it up to switch at will and use whatever it can find. So it took about six days for Josh to get all services working. He had data whenever we were in a Wi-Fi area, so text messages and data would work. But he was without "smart" phone options for a couple of days

Generally speaking, the route from Bogota to Pitalito is pretty rural. We had cell service about 90% of the time, and always in any town of any size. There are small towns here that are one mile long. Cell service and free wi-fi are generally available.

As a rule, 4G is available on the T-Mobile network almost everywhere that data is working. It drops to 3G from time to time as you ramble along.

The unpaved rock garden (road) over the top of the Andes did not have cell service for either of us.

Electricity here is 120v / 60 cycle with the same outlets as North America. Every place we went (expect the road over the top of the mountains) had electricity that was reliable. Even tiny hotels had plenty of outlets.

I brought a charge bring and a car adapter to charge USB devices. So we had all the juice we needed. Because we would recharge all devices every night, we never ran out of battery power on cameras, laptops, cell phones, tablets, Kindle, etc.

If you do need to charge your phone, that's not a problem. The smallest town with only three buildings has at least one sign for buying "minutes." You can charge your devices for about $1 per minute. That's absurdly expensive here since everything else in Colombia is extremely reasonably priced.

As you've gathered by now, Internet access is generally available. It was free at every hotel so far, including the extremely remote hotel at the end of a dirt road outside San Agustin. There are few open wi-fi spots, however.

One several occasions I used my cell phone to open up a hot spot for our laptops. That worked perfectly. (I have an LG G4.)

While driving, I lost data from time to time when we weren't close to any towns. But as soon as you are anywhere near a populated area, the data was on. I found it fast and reliable when it was available.

Now that we're on the more populated side of the mountains, I expect we'll have near-100% coverage from Popaya all the way up to Medallin.


Overall, I'd say that you'll be very please with the technology infrastructure of Colombia as a traveler. I've certainly had less success in some of the most rural parts of the US, Canada, Australia, and the UK!

Stay tuned for another report about the western side of the Andes.

Email ThisBlogThis!Share to TwitterShare to FacebookShare to Pinterest
Labels: Misc