This scheme was designed to confuse customers and partners alike. Windows 7 Starter was too limited to be useful. Windows Home Basic and Home Premium were different, but no one knows how so they only sold Home Premium.

In the end, we all sold W7 Pro and begged our clients not to buy machines with Home editions and then ask us to use them in the work environment.

Yesterday, the Windows 8 versions were announced on the Official Windows Blog
http://windowsteamblog.com/windows/b/bloggingwindows/archive/2012/04/16/announcing-the-windows-8-editions.aspx 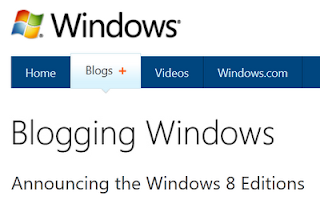 Happily, Microsoft has made the choices simple and obvious. One name, however, will be the focus of some discussion.


Windows 8 is for non-work environments. It can't join a domain. It can't boot from a VHD (virtual hard drive). That's a technology we'll be using very commonly in the years ahead, so it matters. It has no bitlocker or file encryption options.

Windows 8 Pro is for work environments. It has all the features you need. If, as in the past, the difference in price is under $100, then this should be the only version you sell for desktop machines. This is easy to justify to a client. For the price of one hour of labor, you get all the features you need, and will save a good deal of labor over the life of the computer.

For super-cheap clients who really don't want to spend the money, talk to them about price per year. You'll say $33/year for the life of the machine. The cheap client will try to get five years out of the machine, so that's really $20/year.

If they still want the home edition, happily charge them for every single "I told you so" service request that comes in. And sell them the version upgrade when you can.

Windows RT = is the new version being introduced for tablets and cell phones. It is only available as a pre-installed environment and runs only 32 bit software. The really good news is that mobile editions of Microsoft Office are included.

This name can only be the result of a months-long argument that ended with a big fight, a late-night meeting, and a bunch of people going home saying "I don't care anymore. Call it what you want."

Runtime doesn't actually have any meaning for clients. I assume for techno-goobers it refers to the fact that some instructions are embedded and others are accessed when a program starts. Or, you know, whatever.

In previous discussions, RT was referred to was Windows WOA. So if you see that, it's the same thing. Ready for a quick trip down the rabbit hole?

You can see that Windows on Advanced Reduced Information Set Computing Machine might be clunky. So "RT" it is!

A Few Comments on Features

First - thankfully - the Metro interface is not required and you will continue to use a keyboard, mouse, and monitor for the foreseeable future. It would be silly to do otherwise, but there was speculation.

Second, 32 bit is still around. Even on the desktop. Do they still make 32 bit desktop machines? I mean, can you buy a brand new machine that doesn't have a 64 bit processor? It's time to make the move and STOP letting people install brand new operating systems on 5- or 7-year-old computers!

Third, we can expect to see all kinds of juicy "other" editions as needed. These include licensing for kiosks, blade workstations, virtual desktops, and many kinds of mobile devices. I suspect kiosks, virtual machines, and mobile devices will be licensing options rather than actual code versions.

Fourth, since you can "use" Home edition on SBS 2011 environments, you might still have to argue with clients about bringing cheap machines into the environment. No remote access or backup for those home machines. And obviously not official members of the domain.

For all the juicy details as they develop, subscribe to the Windows Blog.