Which Photo Should You Use for Your Profile?

I stumbled onto an interesting site the other day called Photo Feeler at https://www.photofeeler.com.

The basic idea is pretty straight forward: You upload a photo and other people rate it on a few criteria. There are three categories: Dating, Social, Business. If you're patient, you can just patiently wait for people to vote via the "karma" system. You rate other folks' photos and they rate yours.

Or you can buy credits with cash and the votes will come in much faster. Plus you don't have to feel obligated to rate others' photos.

Not super scientific - BUT maybe as random as all the people who will see your picture on social media, web sites, etc. So it's something versus nothing.

Anyway, I decided to try out some photos in each category. This is primarily because you don't get measurements of all traits in all categories. The traits reflected in the voting are: 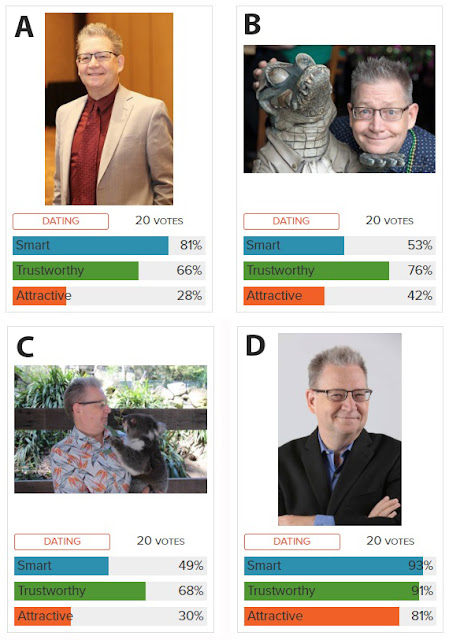 Here are the photos I put up for the dating category.

Lesson One: As women have been telling me for years, I'm just not attractive. So I need to work with that.

Lesson Two: The playing around pictures dramatically impact the perception of intelligence. Throw on a suit and you look smarter.

Lesson Three: No matter what I do, I look trustworthy.

Actually, all of the pictures scored well on "trustworthy," which just leads me to wonder whether people are unlikely to vote others down on trustworthiness without meeting them.

Another way to look at that is that people are trusting by default. I guess that's a good thing in the 21st century, but could get you in trouble on the Internet (or in politics).

Next up, I posted my two most commonly used business photos. 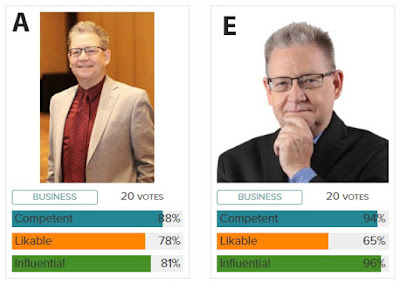 Note that "A" is the same as "A" above, but with different scoring. Both scored pretty well.

I've always worried that the "E" pose looked too fake, but photographers always ask for it.

Lesson Four: Listen to the photographer. If nothing else, let them take the picture and see if it works.

I suspect that the suit is once again responsible for high ratings on competence and influence. So I guess Lesson Five (at least for men) is to go ahead and wear the suit. It does no harm and has a significant positive impact on impressions. I suspect this is also true for women, but I'd love to see some feedback on this from female readers.

Note also that the only way for me to appear "attractive" up above was with a smile and suit. :-) 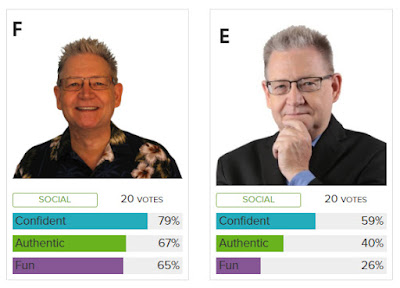 Finally, on the "Social" front, I tested a few more. Note that "E" is the same as up above. And while it scored quite well for business, it didn't do so well for social.

Lesson Six: What works for business may not work for social. But I think we all know that. The challenge is that I use "social" networking for business.

Overall, "F" is one of my least favorite pictures. But I got talked into using it despite the Aloha shirt and over-orange face. Turns out, it's a great social media picture. But the odd pose of "E" is more business-like.

Overall, I think we tend to have a good idea of what works in various settings - but we can also be very wrong because we have to project our personal impressions onto others. And we're often surprised what works when we didn't think it would.

In all, I paid just under $30 to get all the feedback above and more. There are also comments and voting breakdowns. So I think this tool is a good place to do some A/B testing of your mug shots to determine whether they work for you. Or, more precisely, if they give off the impressions you want in various settings.

If you give this a try, I'd love to get a report on your results.