What Can Pope Francis Teach Us About Satya Nadella?

The discussion boards and blogs are filled with speculations about Satya Nadella and what he brings to Microsoft. As only the third CEO ever for that company, it's impossible to say what a normal transition would look like. A great deal of the speculation appears to be people parroting what they read on someone else's blog. That's pretty common when there's a dearth of information.

The most common assumption is that the appointment of someone from the Cloud and Enterprise Group means that those elements will get special attention or more of a push. I don't believe that is as obvious as people make it sound. 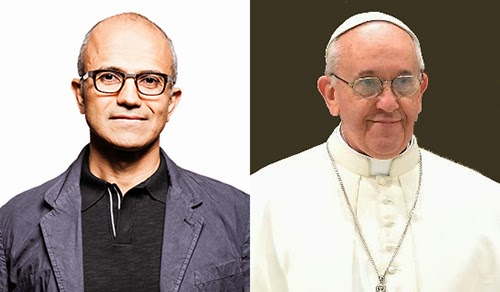 You may recall the speculation when Pope Francis was chosen. Cardinal Jorge Mario Bergoglio had a reputation that was very much in line with the conservative movement in the Catholic Church under Pope Benedict XVI. In addition, Pope Benedict had selected many of the cardinals who were to choose his successor.

But as soon as Bergoglio became Pope Francis, he turned out to be someone quite different than was expected. Why? Well, much of his reputation came from holding specific jobs within the Church. In each of these positions, he did what he was asked to do. At no point did anyone ask, "If you could do whatever YOU wanted to do, what would it be?"

Pope Francis has turned out to be quite different than the pundits expected. But I don't think the College of Cardinals was quite so surprised. After all:

1) They knew the guy. They worked with him for decades as he held different positions. They had lunch with him, traveled with him, saw him perform his job. They almost picked him for Pope the last time. While you might think the decision was made on two week's notice, the decision-making process has been going on for years.


In many ways, Nadella is the same. I'd never heard of him before last week. But I don't eat in the executive lunch room as Microsoft. Nadella is known to the insiders. The process of narrowing down candidates to replace Steve Ballmer started years ago. There is a grooming process that takes place.

Moving from region to region, job to job, work group to work group. At each opportunity, the potential candidates were evaluated by their peers as well as those above them and those below them. Nadella was a candidate, not the candidate.

Microsoft as an organization has a very strong sense of citizenship. I don't think they call it that, but it's almost like a family. If you're "in" the family, there's a sense of loyalty and commitment that all the family members understand. Very few companies can succeed at this kind of community building on a global scale with 100,000 employees.

Nadella was not chosen because of his work on cloud services, Office 365, and enterprise. He was chosen because he has the right combination of intelligence, commitment, temperament, and teamwork that the Microsoft board of directors was looking for.

These personal traits will shape Nadella's leadership more than the fact that he worked with the cloud services group. Some of the people inside Microsoft might be surprised at some of his actions over the next few months and years. Certainly many of us on the outside will see some moves we didn't expect.

I wish Mr. Nadella the best of luck. My relationship with Microsoft has been strained by several changes they've made over the last few years. I hope Mr. Nadella welcomes me back into the fold and gives me a reason to become a raving fan once again.

Topic: Build a Priority-Based Service Department We use the terms all the time: High, Medium, and Low Priority . But does everyone on your t...