Your CEO Transition Plan - An Audio Program from Arlin Sorensen


No matter who you are or the size of you business, there will come a time when you need to transition of your leadership to a new person or a new team. In this 50 minute audio program, Community Leader Arlin Sorensen talks about the most important considerations in planning your move from one management team to another. Great advice for businesses of any size.

This audio program with handouts is perfect for companies anticipating a transition. But it's full of useful information for all businesses. After all, one of the best pieces of advice you can heed is to run your business as if you're going to sell it.

Running your business in anticipation of a management change will help you make good decisions around daily processes as well as budgeting, your org chart, and more.

This is a 50 minutes audio in MP3 format. 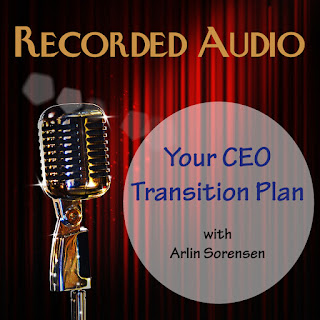 Arlin Sorensen is a Community Leader, Founder and CEO, HTG Peer Groups and Heartland Technology Solutions. Widely recognized as the most successful MSP in the World!


The path of Arlin Sorensen's career transitions from one of mankind's very earliest occupations to an industry that's almost synonymous with the modern age. Arlin graduated from Iowa State University with a degree in Farm Operations, and in 1977 — with his wife, Nancy — began farming. Then in 1982, Arlin purchased his first computer (an Apple II+) for use in his operation and the farm boy was permanently smitten by the technology bug.

Arlin's first's foray into information technology for a living was as a consultant. By 1985, he had moved into the retail side of the industry and then in 1990, Arlin and his brother Brad formed Sorensen's Computer Connection, Inc. (SCCI).

A merger between SCCI and Connecting Point Joplin (Missouri) in 2002, gave rise to Heartland Technology Solutions (HTS). With additional acquisitions and mergers in 2003, 2006 and 2010, HTS now has seven offices in five states (Iowa, Kansas, Missouri, Nebraska and Oklahoma) and more than 75 employees. Under Arlin's leadership, HTS delivers the full spectrum of IT solutions (including networking, document imaging, managed services, e-marketing, GPS-based precision agriculture and telephony) to businesses and organizations in America's farm belt.

While HTS was in the process of growing into the company it is today, Arlin had already founded Heartland Technology Group (HTG) in 2000 to become a vibrant community of IT solution providers, fostering business as well as personal growth through business improvement, accountability and life-work excellence. Reflecting Arlin's interest in building and enhancing relationships through sharing and mutual support, HTG is now comprised of 270 member companies throughout the U.S., Australia, Canada and the United Kingdom.