Have You Tried Meetup for Your Business?

In case you haven't checked it out, hop over to Meetup.com and look around.

I belong to several Meetup groups. In fact, it's my favorite "local" networking group. I am also the organizer for several Meetups. And, most recently, I created one for local Sacramento SMB IT Professionals. 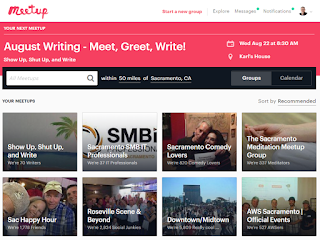 Our local group started out as a "Small Business Server" user group, as did so many local IT consulting groups back in the day. Bob Nitrio tells me we started the group in 2004.

Bob and I have co-organized the group since day one. I was president and mostly ran the group until I sold my first managed service business. Then Bob became president and ran it until just recently.

Bob is moving to Phoenix so all of his family can live close to each other. Good for him, but sad for me.

Anyway, with all the changes over the last few years, I'm going to try to re-start and re-fresh this group. We had a list of about a hundred people who technically belonged to the old group. But, as with so many such groups, we tended to get the same five people at all meetings.

Time for a reboot!

So I started a new Meetup group. I added a picture and description. And then I wandered off to Comptia's ChannelCon. I figured I'd send an email and invite all the old folks to join the new group.

In all, the Meetup group was up and open for business, but ignored for about ten days. When I checked in again, we had over 30 members - mostly complete strangers!

Of course I was very pleased. Now I have to organize a meeting. It would be great to get them all together, along with the older members. At any rate, it's great to see the interest is still out there! We just need to make sure we provide value to the members so they'll show up.

If you are looking for a tool to organize people locally, I highly recommend Meetup.com. It is particularly powerful at making you look like an expert if you can appeal to your small business clients and you are the organizer/presenter.