If you're not a nerd, keep browsing. The entire analogy in this blog post won't make sense. Fair warning.

We all know and love IPv4. It's the Internet Protocol we grew up with. It's been the backbone of inter-networking since ARPANET standardized it in RFCs in 1979-1981 and BSD 4.2 Unix made the source code and standards for TCP/IP public domain in 1983.

And most of us are aware of the basics of IPv6, even if we haven't fully implemented it. We've been told it's coming for fifteen years, so we're used to ignoring the advice to learn it.

Basically, when it was time to create a "Next Generation" of internet protocal (IPng) work was started on creating, standardizing, and documenting the next version. Before it could have an official designation, IPv5 was already given to a specific transmission process called Internet Stream Protocol (commonly known as ST, ST+, or ST2). So IPng became IPv6.

Anyway, IPv5 does exist. Basically no one uses it, and we've moved on to something that will be widely used. 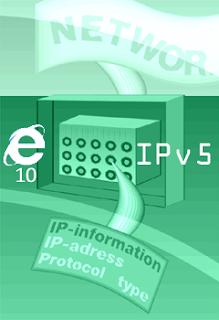 Microsoft take note. Internet Explorer 10 will suffer the same fate. It's not a completely "horrible" browser. But every other browser out there is better.

My assumption is that engineers were told to come up with something so completely different that no one would recognize it and it would stand on its own as a thing of beauty. Well, you certainly can't recognize it as a useful tool. No borders: I can live with that. No menus: Ummmm. No status bar? Opens strange programs and program hooks within the O.S., sometimes when you don't expect it. Never closes completely. If it were any other program, you might think it's a virus. Very disorienting, overall.

Grandma won't have any idea how to use it. Technicians will just feel alienated. And business people will be disoriented.

Now, all of that is fine. It's a crappy version. Put out the next version as soon as possible. Move on, right?

Wrong. In its current incarnation, Windows 8 is a bit too integrated with the IE browser. For example, when you click on something from within another program or file, the ONLY option is to open the link in IE 10. This is true - currently - no matter what your default browser is. For example, if I send you a PDF with a link and you have Chrome set as your default browser, links within that PDF document will open in IE 10. Same for links in email.

I have standardized on the Microsoft Internet Explorer browser since 1998. In the last few years I have had added another browser because some web sites don't work properly with IE (and some work only with IE, so I have to have two browsers).

But with Windows 8 (that is, IE 10), I have finally changed my default browser to Chrome. My backup browser is Firefox. I am still forced into IE 10 a lot more than I want to be. Whenever it happens, I just get out as soon as I can.

I am sure that the next version of IE is under development. These things take time and that's the way things go. My suspicion is that IE 11 will get an extra boost of development funds - or that IE 10 will get a major UI face lift - before Windows 8 is released.

The trend for browsers to ignore agreed-upon standards and each do whatever they want (and they are all guilty of this) is bad for the consumer. I have to use THIS browser with my bank, THAT browser with the merchant service, and the OTHER browser for my primary supplier. Grrrrr.

It's a huge gamble to have the browser so tightly integrated into the operation system that you literally can't escape it. But it's a huge mistake to take that strategy with a browser that's so unknown and uncomfortable to most users. Taking such a huge risk with a browser and then integrating it in the O.S. will mean big, big trouble for Windows 8.

I was going to post this today . . . then Statcounter announced that Chrome had overtaken Intenet Explorer as the most popular browser last week (32.76% to 31.94%). Other sources report IE still has more than half the market (see http://idealab.talkingpointsmemo.com/2012/05/is-google-chrome-now-the-worlds-most-popular-browser.php).

All sources show a downward trend for IE. Believe me, IE 10 will make that drop like a rock.

Having been involved with some product advisory panels at Microsoft, I know they do an incredible amount of research and study with real human beings before this stuff gets released. So I am confused. How can IE 10 be so bad?

Whether it gets released and not used, or gets retooled and never released, the current incarnation of IE 10 will soon be on the shelf with Microsoft Bob.