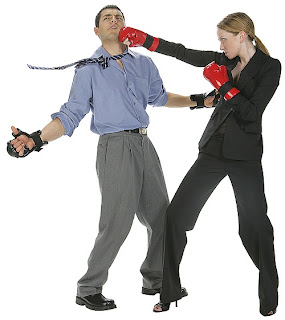 First, how much should you think about your competition?

Second, how do you properly identify your competition?

Third, ignore the "big guys" as much as they ignore you.

Let me tell you a story in very broad strokes that represents what I've seen small businesses do over and over.

I had a client who developed a very cool new product. It made an important process available at a price low enough to bring lots of new clients into the market. No one else appeared to be working on a similar product. In fact, the industry was completely dominated by REALLY BIG players. The two biggest players were owned by IBM and General Electric. And their clientele were literally the biggest companies in the world. This new product would provide critical services to a much broader audience. It would create a new sector of the business that did not exist before.

My client was worried - VERY worried - that IBM or GE would find out about what they were doing and crush them. Either of these companies could dedicate a tiny bit of their revenue and create a competing product. My client worried and fretted over this. It affected the testing and almost secret deployment of the product. As their clientele grew, my client worried every day that the competition would see them and swat them like a fly.

And guess what? Nothing. Nada. Even after growing successful enough to be a takeover target by the #3 business in the industry, IBM and GE never paid any attention to my client. As far as the big guys knew, this company simply did not exist.

I've seen versions of this again and again.

Let's say you and I are in the same business. Say, technology consulting. Are we competitors? Do we go after the same clients? If I win, do you lose? Is your victory my defeat?

This disconnect happens all the time. Small businesses go tilting at windmills, attacking imaginary monsters, and wasting their resources worrying about nothing.

How much should you worry about your competition?

That depends on where you are in the continuum between "commodity" and "unique." If you run a gas station on the corner and there are two other gas stations on the same corner, you have a very clear picture of your competition. If you run a service business that provide something clients can't get anywhere else, then don't worry about your competition: You probably don't have any.

Not have any competition? Yes. Ask your clients why they don't go shopping for a new IT person every year. The answer is probably YOU. You provide something they can't get anywhere else: YOU. You are the unique product that keeps your clients loyal and keeps you in business.

What about other IT shops? If they don't know you exist and are not coming after you, then they're not your competition. My local IT Pro user group has about 130 members. I have come up against one of these other companies exactly twice in the eight year history of the group. In the first instance, a prospect had won a technology make-over from Microsoft. They called Microsoft and wanted to know the names of some local companies who could fulfill the deal Microsoft name three companies. Mine and another member were two of the three.

In the other instance, my co-leader Bob Nitrio and I gave a presentation to a local group. After the meeting some people came to talk to me and some went to Bob. Only one person asked both of us for a quote. We talked to each other because the project seemed fishy and we suspected that they were just looking for high quotes so they could hire a relative. Neither one of us submitted a bid.
In other words: We have no competition!

If someone's really gunning for you and wants to take you out, fine. You have competition. But that's probably not the case.

You should think about "the competition" enough to figure out what makes you unique and valuable. In most cases, you will need to construct a fictional "competitor" to use as a foil in this exercise.

How do you properly identify your competition?

You should only think about your competition in terms of what the clients (and prospects want). Do you give your clients what they want and need from an IT company? Do you offer or sell them things they don't want or need? And what else could you offer them that you don't today? If someone else is provide your client with something you could but do not, that might be your competition.

If you think about this from time to time, and give serious consideration, it is MUCH more likely that you will begin offering your client new things before they have a chance to buy them from someone else. New monitor technology? Sell it. New software package? Sell it. Cloud services? Sell it.

If you DON'T think about what you sell and how well if fits with what your clients want and need, then YOU are your own competition. You, the person who doesn't want to sell managed services, who doesn't believe your clients will sign a contract, and who is waiting for the cloud fad to pass.

You need to re-invent yourself. Don't be the company you were before the recession. Be a new company with a forward-thinking vision and you won't have competition (from yourself or anyone else).

Ignore the "big guys" as much as they ignore you.

At IT conferences, I occasionally hear someone bemoan the fact the Staples and Office Depot (and Dell and Ingram Micro and Microsoft) are selling consulting services direct to small businesses.

Those companies could not possibly serve your clients. For one thing, they don't have you on their team. More importantly, big companies have big-company attitudes and procedures. You have small-company attitudes and procedures. You know what it means to tighten your belt. People who work for big companies have big company sensibilities. Everyone at Staples, Office Depot, Dell, Ingram, and Microsoft will have a job tomorrow if they screw up a project and lose a client. And they'll get paid exactly what they got paid today.

For about five years now, Best Buy has tried to break into the small business market with their Geek Squad. They've recently notched this up a bit by offering Managed Services.

And what should your response be? Bring it on!

Any success they have will be with people who are not (currently) your clients. These folks will get introduced to the concept of Managed Services, but many will be very dissatisfied. And where will they turn? To established IT consultants who have been servicing small clients for years.

In other words, having a large company promise something they can't deliver into your market can actually increase the pool of potential clients.

You will probably never go up against Best Buy.

But you might develop a marketing strategy using them as a straw man. I take my car to a local Toyota dealer for service. They have a sign in the service department that reads "We fix $29 break jobs."

Robin Robins is the ultimate marketing wizard in the IT space. One of her best campaigns is the "Bad Date" letter. Basically, does your IT guy treat you like a bad date. You call and he doesn't call you back? etc. Great stuff.
Maybe Robin can come up with a similar campaign. "Did that that big company promise to take care your business IT and then let you down when you needed them most?"

Best Buy will never be your competition because they're not coming after your clients. But you could be their competition if you want to.

The bottom line: Your company is irrelevant to virtually everyone you might define as your competition. Make them irrelevant to you. Simply don't worry about them.

What you do depends on YOU - not your competition.