If you follow me on Facebook, you may have seen that I signed up to try Lyft's Driverless Car experience in Las Vegas last week. Here's the report on that.

When I took my Lyft to the hotel in Vegas, I was offered the opportunity to use their "Driverless" option. That's in quotes because there are TWO technicians in the front seat. One is the driver and the other appears to be there to explain everything to the riders. 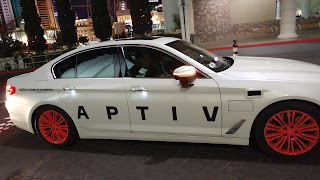 First thing I noticed: This is the ugliest BMW you will ever see.

Second: This is definitely a test environment. Massive display of digital information on the screen (you're not supposed to take pictures). As you can see, Aptiv is running the driverless test and data collection.

Third: No drinks allowed. As dude explained, the rear passengers are sitting on top of two super computers. I think we have different definitions of what that phrase means.

The Ride started with the driver (Jordan) actually driving the car. He wound around until we were well out of the Fremont Street craziness. Once we hit Las Vegas Blvd, he switched the car to driverless mode.

The car kept pace with traffic and smoothly stopped all by itself. NOTE: All the higher end BMWs do this. So nothing new there.

This car also started by itself when the lights turned green or traffic in front started to move. On the display, you could see indicators for whether there were cars on the left, right, and in human blind spots. Theoretically, it can change lanes by itself. We did not see that.

At one point, we were behind one of those mobile sign trucks. These are basically moving billboards. They go slower than normal traffic in order to maximize their visibility. Jordan didn't want to stay there, so he took control and changed lanes. That was the only "abrupt" move in the experience. 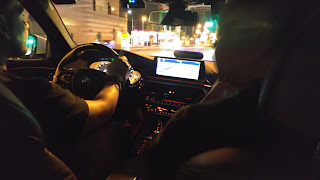 After a few minutes, the driverless control took over again.

When we got to our hotel, Jordan took over again and drove us to the hotel front door.

1) This is not much of a proof of concept. I know for a fact that I can buy a car off the lot that's more "driverless" than this experience.

2) Apparently, they have sensors embedded in street light controls all up and down LV Blvd. My assumption is that they are testing two way communication more than the actual driverless technology.

3) More than once, the explainer guy (who's name I did not catch) used the term Lidar, and explained that their cars will soon be able to communicate with one another as well as the traffic controls. So, once again, I suspect they are working on a bigger picture than simple driverless technology. Las Vegas is one of the most cutting edge "smart cities" and this could take them to a new level.

According to my Lyft app, this ride was 5.72 miles and took 31 minutes. If it had been a regular Lyft ride, I suspect we would have taken a different route. But their test is on LV Blvd.

My guess is that we were driverless about 2/3 of the time. It was perfectly safe. And not particularly cutting edge.

For those who think that driverless cars won't happen in your lifetime, please note how much money is being pumped into this stuff. There are many layers beyond the simple robotic control of the automobile. And companies are working on next-generation technologies that are complementary with driverless cars.

"The future is already here – it's just not evenly distributed." - William Gibson