I got a bit of a surprise today. I received notice from ChannelPro Magazine that I'm on their list of 20/20 visionaries again this year. At first I thought someone was reposting a note from last year on Facebook. Then I got the email. 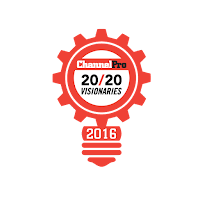 I'm honored to be part of this crowd two years in a row. See the full article at http://www.channelpronetwork.com/article/introducing-2016-channelpro-2020-visionaries .

Check out the list of Visionaries and connect with them. ChannelPro really has done a great job of highlighting some people you should be familiar with in the small business IT community.

And if you go to many events, I guarantee you'll run into someone from this list - either on the stage or in the seat next to you!

And here's their press release regarding the awards:


ChannelPro-SMB, the premier source of business and technology insights for I.T. channel partners serving the small and midsize business market, has announced its second annual list of 20/20 Visionaries for 2016.

The ChannelPro 20/20 Visionaries are comprised of 20 influential, go-to authorities in managed services, cloud computing, and partner support and education from the vendor, analyst, and consulting communities, as well as 20 of the most far-sighted resellers, MSPs, and community leaders from the SMB partner community. These are the IT professionals who not only serve their SMB clients with top solutions and services, but move the industry forward with innovative ideas, a commitment to continual improvement, and a willingness to share what they know to help others succeed in the market.

“We are proud to reveal this year’s class of smart, insightful thinkers,” said Cecilia Galvin, executive editor, ChannelPro-SMB. “Many of the honorees who made the grade in 2016 did so last year as well, but there are some new faces too. What they all have in common is a deep understanding of the channel and how to thrive in it.”

To develop the 20/20 Visionaries for 2016, the editors of ChannelPro-SMB turned an eye to the channel players and channel pros they have spoken with, listened to, and sat with face to face over the past year to compile a broad list of possible honorees. After much debate, the list of this year’s visionaries emerged. Each year this process will be reprised, with 40 honorees selected from many worthy channel candidates.

A complete list of the ChannelPro 20/20 Visionaries for 2016 appears in the May print edition of ChannelPro-SMB as well as on the ChannelPro Network website at http://www.channelpronetwork.com/article/introducing-2016-channelpro-2020-visionaries.

No other media company focuses on the small and midsize marketplace like The ChannelPro Network. http://www.ChannelProNetwork.com