Replace Your Sales Funnel with a Marketing Map

I'm sure you've heard of a "sales funnel." The basic idea is that you have a large mouth at the top of the funnel and your prospects enter there. With each stage of the funnel, a certain number of prospects get weeded out and the rest remain in your funnel.

The funnel starts out large at the top, but gets smaller and smaller until just a few people are left at the bottom: Your new clients. Over time, if you have a well-defined sales process, you should be able to generate some average statistics that give you a sense of what you can expect from your sales process.

Here's an example of the classic funnel: 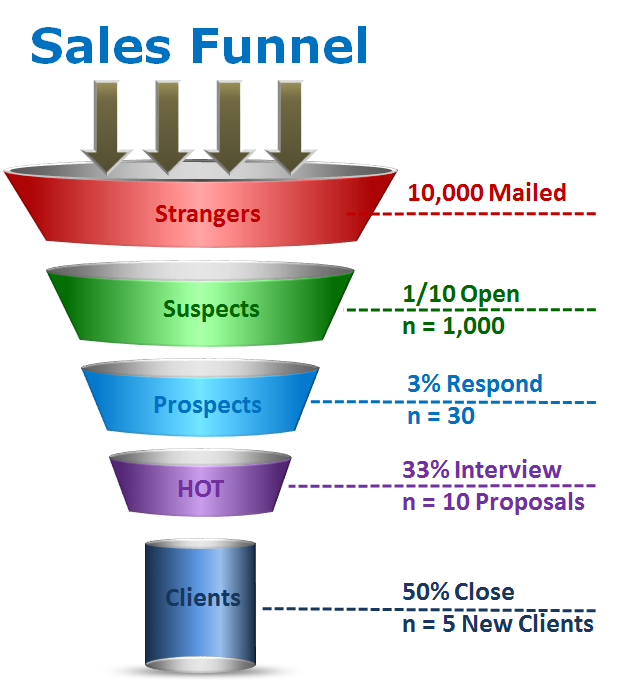 In this case, you start by doing a mailing to 10,000 "stranger" prospects. Historically, 10% will open that mail. So now your funnel narrows to 1,000 prospects. If you have a 3% response rate, 30 of those people will respond to your mailing.

You will be able to "interview" and make proposals to one third of these, on average. That brings you to ten hot prospects. And if you close half of them, you'll have five new clients.

Let me start by saying that just about everything about the classic funnel view of marketing is accurate. If your marketing is always changing, the percentages will change over time. But if you HAVE a process and you FOLLOW your process, you will know how much effort and money it takes to get prospects through the funnel and get new clients.

When you hear people say "It's a numbers game," this is what they mean.

Notice also the labels attached to each stage of the process. The classic funnel takes "strangers" and introduces them to you company. Eventually, if they do what's expected and you do what's required, then a few of them become clients.

This is where the classic funnel begins to fall apart. I propose a different view of the world of marketing. It assumes that you are not always marketing to strangers.

In the classic funnel, the assumption was that you would start with people who had no connection to you at all. This would be a list your purchased, or a broadcast medium such as a newspaper or radio ad.

The classic funnel also assumes that you control the entire process of squeezing down strangers into suspects, prospects, and clients. But that is rarely the case today. Today we have to operate at many, many levels at once.

... and they're not strangers.

A) Mailing. Call to action is request a network checkup.

D) Present results . . . and a proposal for managed services.

Steps "B" and "C" are very difficult here because these people really are strangers. In the classic model, these people have never heard of you or your company. The first introduction is a letter asking to engage in work. Yes, you're offering a freebie. But they know the goal is a sales meeting.

In the world of social media, you have many more friends and friends-of-friends to market to. AND it's much lower pressure. AND you might actually make some real friends in the process.

Let's look at this process from a more modern point of view: The Sales Map. 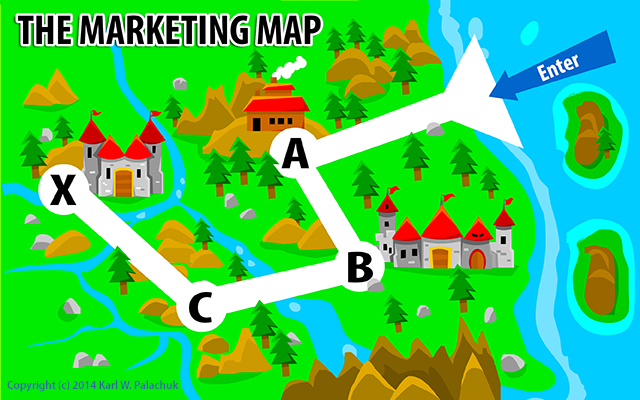 With a sales map, you establish a path for prospects to follow, but you acknowledge that they might enter at any point in the process. It's also clear from the start that you don't control most of the process. So the funnel goes right out the door.

Think about a social media campaign. Someone might be connected to you Facebook and LinkedIn. You would like them to go to your blog and potentially check out your web site. On your web site you have lots of opportunities to request a network checkup.

Then you run a contest to get people to "like" your Facebook page. Maybe you give them a coupon or get them involved in local charity event that's unrelated to work. Once they are connected and engaged with you online, the likelihood of connected in other ways goes up.

The point is: You might like to control the order of the process, but you recognize that you can't. And you might even want to calculate some nice probabilities, but you can't. People engage - and disengage - as they see fit.

The best you can do is to be engaging!

In your perfect world, you might envision the following "funnel" activity:

A) Connect on LinkedIn.

F) Go to the web page and fill out the form.

H) Present results . . . and a proposal for managed services.

I) Close the deal.


BUT it's just as likely that folks started on your blog, connected on Twitter, wandered over to Facebook, connected on LinkedIn, joined your contest, and DIDN'T fill out the form.

But, at some point over the next few months, that new connection engaged at a higher level on Twitter (of FB or LI or whatever), and developed a generally positive impression of you and your business.

This model is very messy and hard to control. But it's much more realistic.


The Challenge of the Sales Map

Your map won't have three or four stops on it. It will probably have fifteen or twenty. People can engage at any point in the process and engage at many different levels.

Your challenge consists of always pointing them to more and more engagement.  You might still have (you should still have) mailing campaigns. In addition to that, you will now have a never-ending "presence" on social media.

None of this is difficult. But it IS never-ending. You have to always keep promoting your business. That hasn't changed. HOW you promote your business and guide clients to engage with you has changed significantly.